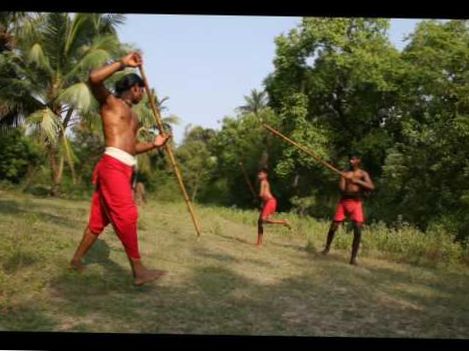 Grand Master (Aasan), Jothi Senthil Kannan, from Pondicherry, South India, is without doubt one of very few Silambam martial artists today who attempts to truly continue the warrior spirit of a bygone era. For a Grand Master he is young in years, though he has practised Kuthuvarisai and Silambam since the age of five, when he was initiated into these ancient Tamil martial arts by his paternal grandfather, himself a Grand Master. A perfect physique and rare expert knowledge of all 12 Silambam styles has only been achieved by pursuing a disciplined lifestyle and rigorous, full time training routine, sometimes exercising continuously for six hours every day. Moreover, perhaps unique among todays Silambam gurus is that, in addition to teaching and performing martial arts, just like his ancient forerunner, Agasthiar, Jothi combines the art of Siddha healing with his martial arts activities.2

So, despite passionate champions of the art such as Jothi Senthil Kannan, why has Silambam witnessed such a decline in popularity and exposure?

At a local level much tends to be written about the decline of indigenous martial arts during the era of British rule in India. The British guns and canons subdued regional kings, and the practice of tribal martial arts was forbidden, no doubt for fear of revolt. Even village folk dramas were discouraged for fear it would disseminate anti-colonial sentiments. Throughout southern India every large temple had a centre for learning martial arts, but during the colonial period these centres found themselves closed, and as a consequence, martial arts training went underground. As a result, inevitably, growth and exposure was halted, though this in itself is a rather tenuous reason for the decline of an ancient martial art.

In short, the decline of an art form that is no longer required in its original form but which does nonetheless require extreme discipline to perfect, is not surprising. Modern day living with any number of technological and quick-fix activities distracts potential students away from an activity that demands a great deal of physical and mental stamina. To truly embody the warrior spirit, one must almost lead the life of an ascetic. Silambam must become a lifestyle. The student, or rather disciple, must live only for their art. Strictly no alcohol, strictly no smoking, and ideally, strictly celibate!

Despite the historical diaspora of Silambam far beyond the borders of India itself; and despite it having formed the foundation of many of the more familiar martial art forms known today, Kalaripayattu in Kerala to name but one, Silambam remains firmly regional, and somewhat secretive in character. That, combined with a lack of recognition at national level for the profound contribution Silambam has made to the evolution of martial arts throughout the world; along with an unfortunate propensity to regard its folk art status as somewhat less valuable than the classical arts, Silambam exists today relatively unknown, struggling to maintain its rightful place in the pantheon of global martial arts.

Providing passionate and dedicated exponents such as Jothi Senthil Kannan continue to expose Silambam to a wider audience, there is hope for this extraordinary martial arts continued evolution. And there is a small but increasingly growing interest in Silambam outside of India, in addition that is to the Tamil communities across the globe that are more familiar with Silambam as part of their ancient heritage. Students from France, Austria, Australia, Belgium, Germany, Sri Lanka, Malaysia, Iran, UK and USA are being drawn to the combined spiritual and physical benefits that Silambam offers.