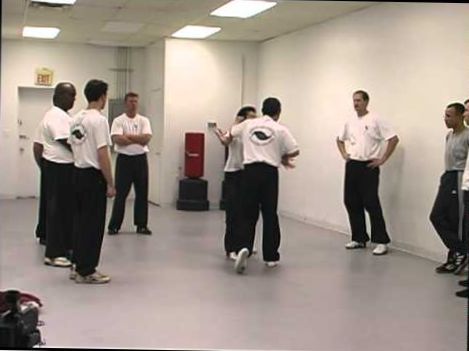 Master Su demonstrates more EOE crossing. Here the crossing method demonstrated is an evolution of the traditional Hsing Yi Quan "Horse Fist/Form." Horse incorporates good tactics for destroying an opponent's guard and striking, while not allowing the opponent to strike back. This is classic EOE "Crossing Methods" thinking – from Hsing Yi Quan: "Strike, without allowing the opponent to strike." Crossing allows for protection and defense, simultaneously. EOE sees an either/or choice of "defend or attack" as inferior strategically. EOE is oriented around allowing for simultaneous protection and attack. In fact, EOE, to the best of my understanding, believes that the internal martial arts incorporate this strategic mindset in all their variations (Hsing Yi Quan, Ba Gua Zhang, Tai Chi Quan).

This seminar filmed at the Herndon/Sterling Branch of White Birch School of K'ung Fu, in 2000. Thank you Si Fu Sean Kans for your hospitality.

More to come, including material from the October 2010 seminars hosted by Natural Motion Systems, in Miami.