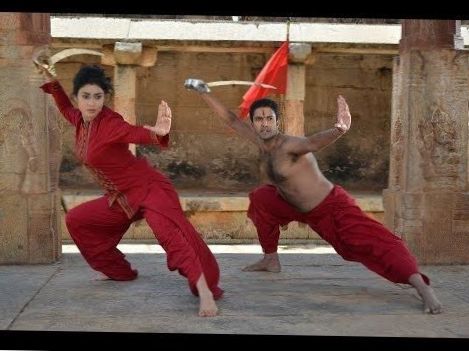 WELCOME to Kung-fu Kingdom! NEW SITE ONLINE NOW! If you're into the martial arts and kung-fu, stay tuned and develop your inner-warrior with Kung-fu Kingdom's news, reviews, exclusive interviews and much more! Feel free to subscribe and share your comments on our YouTube channel. You can "like" us on Facebook: kungfukingdom2012, we're also on Twitter and Instagram -so, it's all the way…with KFK! Kung-fu Kingdom…dedicated to the martial arts…

In this documentary, we look at one of the world's oldest and most dangerous martial arts: Kalarippayattu. Closely linked to Hinduism, Kalari means: battlefield/gym and Puttara means: platform/stage. This may translate loosely into something like "Fight Club"!

Here, they are introduced to and undergo an intensive 5-day program in traditional and urban Kalarippayattu forms and techniques to prepare them for a weapon demonstration and full-contact hand-to-hand battle.

As you see the manoeuvres: jumps, acrobatics and weapons use, it progressively gets more and more interesting, and entertaining…modern Western fighters meet ancient Eastern warriors -enjoy!

Here are some interesting notes:

This fighting art was only used by a special class of warriors in ancient times of war to protect their king and masters -they would fight to the death.

Practitioners of this art believe that animals are the best fighters because they're natural and don't have to think about what they're doing. They simply…act -instinctively!

The British outlawed this art, out of fear while they occupied India.

Martial artists of this style don't normally train with metal weapons until they've practiced for 6 years with the standard wooden ones.

Jimmy Smith, the professional MMA fighter has a large Ganesh ("Remover of Obstacles" elephant god) tattoo on his back!

Interestingly, on observation and analysis of the movements involved, many say that Kalarippayattu is the source of modern Chinese kung-fu.

Kalaripayattu – the oldest existing martial arts in the worldKalari Payattu