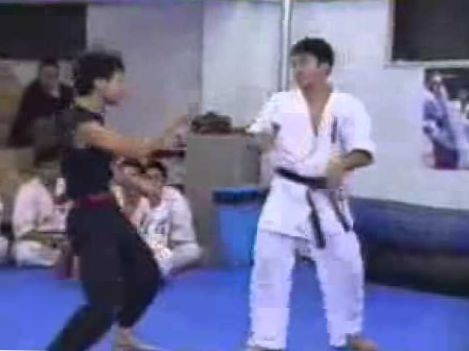 1banryukyu offered this in a comment: This clip is from a Japanese TV show that was hosted by Ucchan Nanchan (famous Japanese comedian). The Japanes at the start of this clip reads: Reiki shi teki ko ryu sen (English: The greatest thing in history), Kyokushin Karate vs Chugoku Kenpo (English: Kyokushin Karate vs Chinese Kempo), 3 tai 3 suparingu (English: 3 people will fight). The Chinese Kempo Martial Artist came to a Kyokushin dojo to kumite with the Karateka, they are using their style against the Karateka." Thanks a lot for that information, bud.

Trophy92 sent me a PM saying the first match is karate vs drunken kung fu, and the second is karate vs snake kung fu, if anyone's interested in what kung fu is getting thrashed :p

I have once again disabled comments because people are stupid, assholes, and stupid assholes. Styles ARE irrelevant if the training is done right. Ask any experienced fighter. A boxer of six months can beat a karateka of six years if all the karateka does is set sparring and kata, with no live sparring or mindset to karate up a resisting opponent. Just give it a rest, it's 2016, there are so many message boards for you to get shot down on for talking nonsense.