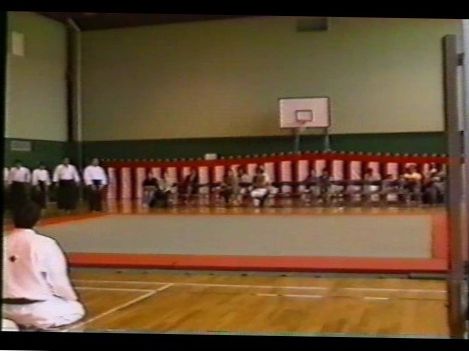 This is the last appearance of Takeda Tokimune Soke before his death, and it’s also a very important document, since it proves beyond any doubt that Kondo Katsuyuki Sensei is the only Menkyo Kaiden and inheritor of this art.
In front of ALL the members of Daito-ryu, including all of those that later claimed differently, and in front of the Soke, the Soke’s family and all the administration, Kondo Sensei is clearly – and two times – defined as “Soke Dairi”, and “the ONLY Menkyo Kaiden of Daito-ryu” by the speaker (in Japanese). He is the only person posing as uke for the Soke, and the only one sitting with the family for the entire event. When it is time for his demonstration, which is the last one (the most important position) EVERYBODY has to sit in seiza, just like for the Soke. Then at the end Kondo Sensei picks up the microphone and speaks in favor of Takeda Soke’s nephew, Hitoshi, promising to teach him all the techniques of the art faithfully. Unfortunately later the nephew decided to quit, leaving Kondo Sensei to be the last inheritor of the art.
Present at this demonstrations were ALL the students that later claimed to be the top teachers of Daito-ryu, probably hoping that this video would never be released, including: Sano Sensei, Kato Sensei, Arisawa Sensei, Ishibashi Sensei and most of their students.
The complete video is over 2:40 hours long, I trimmed out most of the demonstrations to leave in only the interesting parts.
I am officially authorized by Kondo Sensei to publish this video on YouTube.