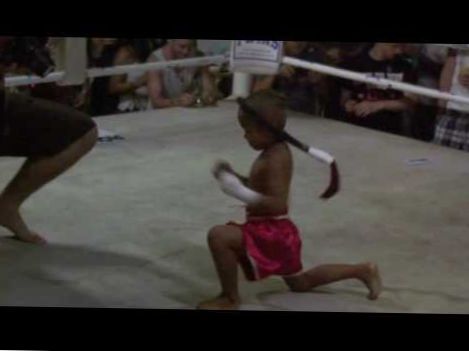 Check out the latest video from TMT:
5 year old future Muay Thai fighter Team (son of the famous Muay Thai champion Fasuchon Sit O) demonstrates the traditional Wai Kru at Tiger Muay Thai & MMA Training Camp's monthly BBQ Beatdown 25 on May 29, 2010. The wai khu ceremony is a Thai ritual in which students pay respects to their teachers in order to express their gratitude and formalize the student–teacher relationship. It is regularly held near the beginning of the school year in most schools in Thailand. Wai khu has long been an important rite in the traditional martial and performing arts, as well as in astrology and other traditional arts; students and performers of Muay Thai and Krabi Krabong, as well as Thai dance and classical music, will usually perform a wai khru ritual at their initiation as well as before performances to pay respect and homage to both their teachers and the deities who patronize their arts.